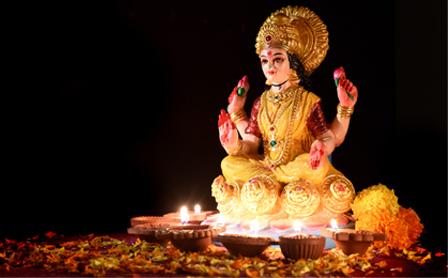 Varalakshmi Vratam is a fast observed by married women in South India and Maharashtra. On this day, Goddess Lakshmi, the goddess of wealth, is worshipped with Poojas and prayers. There are some myths associated with Varalakshmi Vratham. The most important of these are the stories of Charumati and Shyamabala.

The Skanda Purana says that once Parvati asked her consort, Lord Shiva, if there was any vratam that was beneficial to women. Shiva mentioned that there was one and went on to explain the importance of Varalakshmi Vratam, which was supposedly very good for married women. Shiva then told her the story of Charumati.

Charumati was a pious woman who was very dedicated to her family. On seeing her devotion to her husband and family, Lakshmi was pleased and appeared in her dream. She also asked her to perform the Varalakshmi Vratham and explained the procedures to be followed for the Vratam as well.

Charumati performed the Varalakshmi Pooja as the Goddess had advised. She also invited all her neighbors, friends and relatives to take part in the Pooja. After the Pooja, all those who had participated in it were seen to be blessed with wealth and prosperity.

Another well-known story associated with this Vratam is that of Shyamabala. Shyamabala was the daughter of a king called Bathrasiravas and Queen Surachandrika. She was also the wife of a prince.

Once when Shyamabala was visiting her parents at their palace, she saw her mother, Queen Surachandrika, chasing away an old lady. The old woman had told the queen to perform Varalakshmi Pooja but the queen was annoyed that a beggar was advising her to do Poojas. Hence, she drove her away.

But Shyamabala was a kind-hearted person, so she beckoned to the old lady and listened to her talk about the greatness of Varalakshmi Vratam. On returning to her husband’s palace, she performed the Vratam as the old lady had told her to. Soon, her husband’s kingdom started prospering and everyone appreciated the prince for his good governance.

Meanwhile, Shyamabala’s parents had to undergo numerous sufferings, and there was suffering all around. The king and queen began losing their wealth and people started rioting against them.

When she received reports about the troubles in her parent’s kingdom, Shyamabala sent across pots of gold, but as soon as Queen Surachandrika gazed at them, they turned into ashes.

After some reflection on this mystery, Shyamabala put two and two together and concluded that it all had to do with her mother’s act of chasing away the old woman from the palace. She also knew that the old woman was Goddess Lakshmi herself in disguise.

Another story says that Varalakshmi Vratam’s origin is associated with a game of dice that Shiva and Parvati were playing. Parvati was winning all the games and Shiva accused her of cheating. So they appointed Chitranemi, one of Shiva’s ganas, to be the umpire.

It so happened that Chitranemi ruled in favor of  Shiva. Parvati became angry and cursed him to be a leper. Shiva wanted Parvati to forgive Chitranemi, so she agreed to take back the curse if he was willing to watch pious women performing the Varalakshmi Vratam. Supposedly, the tradition of Varalakshmi Vratam began from then onwards.

On this day, women wake up and take a bath during Brahma murtham. After cleaning the Pooja space, they decorate it with rangoli or kolam. They also prepare a kalash (a silver or bronze pot). A symbol of the Swastika is drawn in the Pooja space and some sandalwood paste is also smeared. Then the kalash is filled with five different kinds of leaves, coins, water, raw rice and betel nut. A mirror, turmeric, black beads, small black bangles, and comb are also placed in it.

The neck of the pot is covered with some cloth and mango leaves are kept in its mouth. The mouth is then closed with a coconut on which some turmeric is smeared. It is placed before Goddess Lakshmi’s idol, and Aarti is done. The kalash will be placed on a bed of rice. This ritual is to invoke the blessings of Lakshmi. First, a Pooja for Lord Ganesha is performed, and it is followed by Lakshmi Pooja. Sweets are given to all the participants, and new clothes are worn by the family. On Saturday, the water in the pot or kalash is sprinkled in the house.

Varalakshmi Vratam is observed every year. The festival is held on the Friday before full moon day in Shravana month (July-August). This year the festival is on August 20.

Married women fast on this day and pray for the well-being of their husband and family. A common belief is that worshipping Varalakshmi on this day equals offering worship to Ashtalakshmi or the eight goddesses who bestow 8 kinds of wealth.