Why are French Tip Nails So Popular? 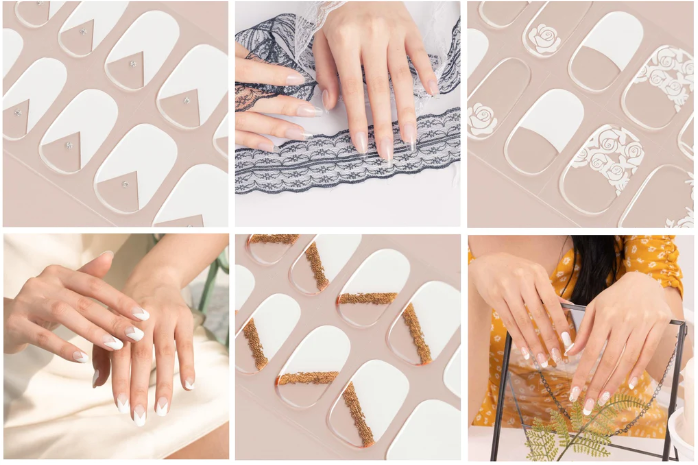 French Tip nails are undoubtedly one of the most popular styles of manicure looks. They bring a subtle and classic feel, while also being extremely elegant – allowing for proper use on any formal or casual occasion. Let’s talk about how French Tip nail strips started, and how they became one of our most popular lines at Danni & Toni. Let’s talk about why french tip nails are popular.

What Are French Tip Nails?

What are French tips, and how do you achieve this amazing look?
French tips refer to the white polish on the tips of the nails, above the base of the nail which is traditionally painted in a pinkish nude tone. Traditionally, a classy white is used on the tips with a pale shade on the base, followed by a top coat. But over time, French manicures have expanded to a wide range of shades.  The mix of the clear nail appearance combined with some white or other color design elements makes these nails distinctive from other solid color or design nails.

Are These Nails Actually French?

You may be surprised to learn that the French tip style did not originate in France itself. Instead, the trend actually has its roots in 1970s Hollywood. Jeff Pink, the founder of a nail polish company first came up with the term, although the look was seen in California going back to the 1930s.
So why are they called French? Well, the name sounded more exotic and appealing to customers, and also the style has some European characteristics in appearance.
It wasn’t long before the French manicure took over in the US and also around the world. Now in France, they also use the term distinguishing it as French style.

How About Clear Nail Strips?

While clear nail strips are not technically French Tip, they use the element of the base coat, which a design can then be placed on top of. Clear gel nail wraps are a simple and fun way to make your natural nails stand out, while also giving them a special shine that looks great. Meanwhile, you could also put custom designs on top of the clear nails without affecting your natural fingers. In the end, every woman should have at least one set of clear semi-cured nail stickers set aside to use when the occasion arises.
For more information regarding French Tip Nails visit our blog: https://www.dannitoni.com/blogs/danni-toni/why-are-french-tip-nails-so-popular
Please log in to like, share and comment!
Search
Sponsored